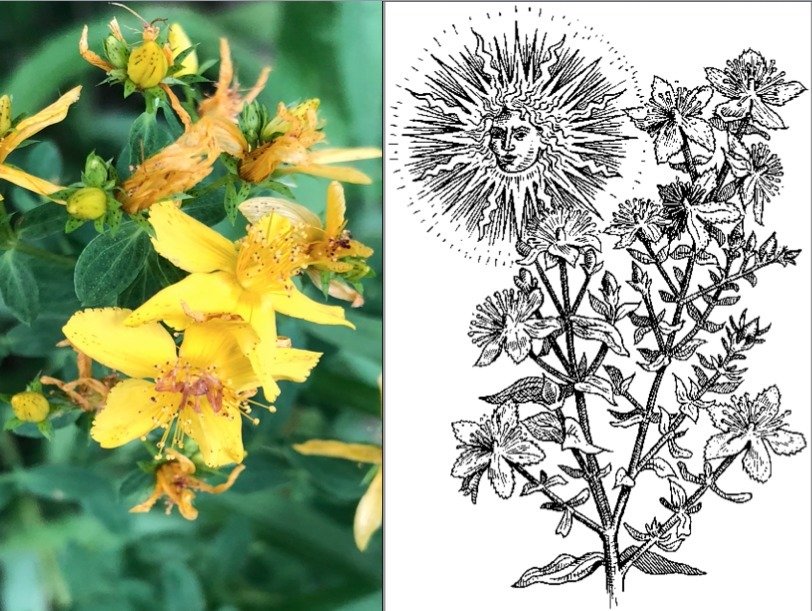 As the days grow shorter and colder and the embrace of the night deepens, some of us may find that our inner sun is also waning. St. John’s Wort (Hypericum perforatum), which Matthew Wood has held up as perhaps /the/ “archetypal healing herb” and Father Sebastian Kneipp has called the “perfume of God” and the “flower of the Fairies”, can help some of us navigate the states of all pervading darkness which take hold as we approach the Winter Solstice and the rebirth of the light.

In the symbolic language of Alchemy, the metamorphosis of a black bird into a white bird stands for the albedo, or whitening, process – a transformational movement of the psyche out of “its dark and depressive leadened state into a reflective sublimation that lightens the soul and is thought to bring a greater sense of consciousness and freedom. It is a kind of purification process and catalyzes psychic development” (Marlan). While holistic herbal medicine does not simply prescribe St. John’s Wort for unspecified “depression” but always rather searches for the root causes underlying such a state of body and soul, I do see the “primary yellow flowers” of St. John’s Wort, as Rudolf Steiner described them, as a potential catalyst for this “whitening” process. For Steiner, Hypericum works to combat the malnutrition that stems from an overburdening of the organs of the rhythmic system – “There is the rhythm of the breath, the rhythm of the circulation, the rhythm manifested in sleeping and waking, and countless other rhythmic processes.” St. John’s Wort helps to carry the anabolic processes into the sphere of the nerves and senses and to aid the astral body’s inner mobility. The astral body is linked to the Manipura or solar plexus chakra and Hypericum is an important remedy for treating conditions of the enteric brain or neural gut.

In the words of Julia Graves: “Flowers that shape tufts such as St. John’s Wort (a star with a tuft) point to nerve endings and sensitivity. St. John’s Wort is one of the finest nervines available. All of its starry, sun-yellow flowers look up; they facilitate the prana flowing in through the crown”.

One may do well to imbibe in the herbal sunshine that St. John’s Wort offers when, as Hölderlin has it in his novel Hyperíōn, it is necessary to “call on Fate to give me back my soul.” Hypericum is a herb of spiritual and emotional protection, as is attested by a traditional use of the oil noted by Deborah Frances: “Recognizing that women are more sensitive and open during menses, women in traditional cultures in Europe painted their labias with an oil of Hypericum for protection during moontime.” One need only look at the flowers of St. John’s Wort, with their “golden five-petalled blooms radiating like small sun-wheels around a shower of bobbing stamens” (Fischer-Rizzi), to realize the magnanimous beneficence of this remedy. Fischer-Rizzi continues: “our forbearers saw in these flowers the captured power of the sun, each five-pointed star a sign of the benevolent powers. Ancient druids saw a resemblance to their sacred pentagram while Christians felt it symbolized the five stigmata of Christ.”

Lastly, let us note that the first part of the Latin binomial Hypericum perforatum is a derivation of the name of pre-Olympia God of the Sun Hyperíōn, which literally means “The High-One.” That the yellow flowers of St. John’s Wort turn blood red when placed into menstruum and processed as a tincture or oil reminds us of the life giving power of the Sun, the Sun which gives without receiving.