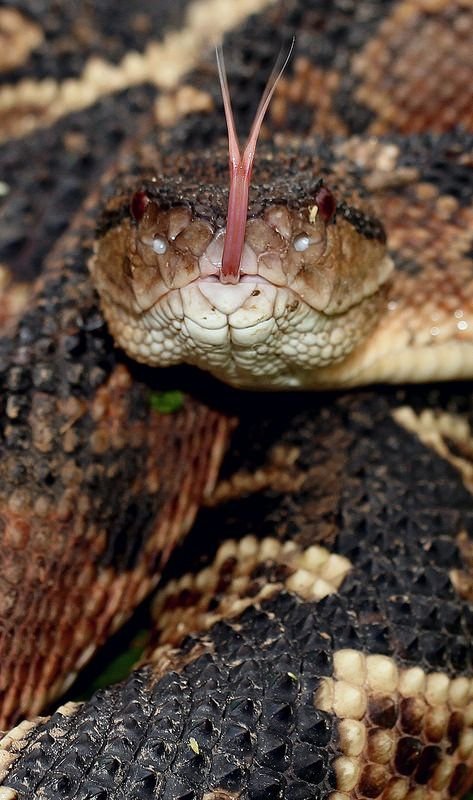 From the perspective of Earth evolution, snakes were the first creatures to embody the process of separation, to initiate the incorporation of ego forces by way of a nervous system housed within a bony canal or vertebral column. As Rudolf Steiner puts it, “The snake is the first to enclose within a tube the selfless undifferentiated gaze of the Earth Spirit, thus forming the basis of ego hood.” The group soul that propelled the evolutionary development of snakes was more deeply connected to the physical form than it was with any other previous creature, hence their being horizontal and earthbound (or ‘fallen’), a characteristic that was never overridden. It is no wonder that the serpent was the tempter in the Garden of Eden: it is with the serpent that the independent ego, the I-forming capacity, finds its origins. That snakes repeatedly shed their skin can be seen as a symbol of the necessity of ego transformation (or as the presence of death forces in the ego structure). The serpent teaches us the importance of relinquishing outdated, obsolete material of the self.

Lachesis is a homeopathic remedy made from the venom of the bushmaster viper. This is a remedy that has a great deal to do with survival, instinctual life, power, speech, sexuality, and passion. The lachesis patient is often highly expressive, strong willed and strong minded, exhibiting an unbounded intensity, or even mania, on many levels. They may be the type of person who experiences truly ecstatic states of being, which they wish to share with others and speak about incessantly. On the other hand, lachesis individuals can suffer from and have little control over their jealousy, tendencies towards anger or violence, paranoia, and a sense of persecution. Alcoholism and drug addiction may be a part of the picture, along with extreme lasciviousness. Characteristically, the lachesis patient sleeps into an aggravation (e.g. the patient’s breathing may stop as soon as they fall asleep, or they may wake up with crippling headaches in the morning).

Complaints tend to be left sided and made worse from heat. The patient is also intolerant of constriction, especially around the neck (turtlenecks and scarves are unbearable). Swallowing can be difficult, especially the swallowing of liquids. There are several very interesting peculiar symptoms covered by this remedy, including the feeling that one is an animal, that the heart was hanging by a thread and would be torn off were it to beat violently, waking up with the feeling that one has no friends, and that all the day’s events were but a dream.

The articles in this series are intended to help give you a sense of the beauty and scope of homoeopathy, a truly holistic system of medicine – the medicine of experience if there ever was one. If you’d like to learn more about what homeopathy has to offer, please feel free to be in touch.